Skip to content
adwservice.com.ua » What are the keyword match types in Google Ads?

What are the keyword match types in Google Ads?

Using keyword match types in Google AdWords, you can determine how closely a potential buyer’s query should match their ad impressions.

With this tool (if used correctly), you can not only improve your ad quality scores, but also significantly reduce your campaign costs. Thus, you can adjust whether the system should show ads if a synonym for the query was entered in the search bar or words are in reverse order, etc.

There are four match types in Google AdWords. By default, wide is enabled in the system; there is no need to apply special modifiers to use it. Also, a PPC specialist can include exact match, phrase match, and broad match with a modifier.

Each of them can be used depending on the purpose of the RC. For example, if we need to drive the maximum amount of traffic to the site, we use broad match, but if we get to the user intent as much as possible and get the most relevant transitions, then exact match.

Important! A PPC specialist must understand the purpose of each of the match types – they allow you to stop the display of ads for non-targeted keyword combinations, and the success of the AC directly depends on them.

This keyword match type is configured by default. Impressions are carried out by the maximum number of queries, including word forms, synonyms, opposite word order, etc. It is used quite rarely, since the system itself is not able to determine adequate synonyms, and we risk getting many non-targeted transitions to the page. 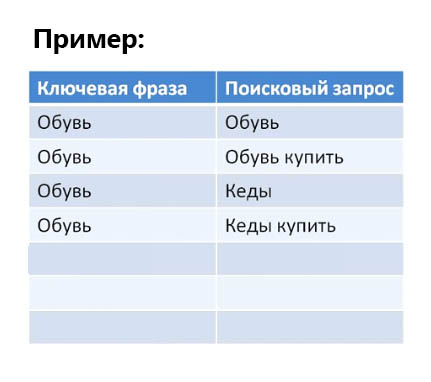 Attention! When working with a broad match type, you need to constantly expand the list of negative keywords and regularly monitor reports in the advertising account.

Important! Most of all, broad match is interesting for advertisers who occupy a narrow niche and are trying to understand what queries in search engines for visitors in general will be interested in the product.

The most commonly used type of keyword match, making ads more predictable. It excludes synonyms from coverage, leaving abbreviations, declensions, words with the same root, errors. The ad will definitely contain word forms or phrases, next to which put a “+” sign during setup. 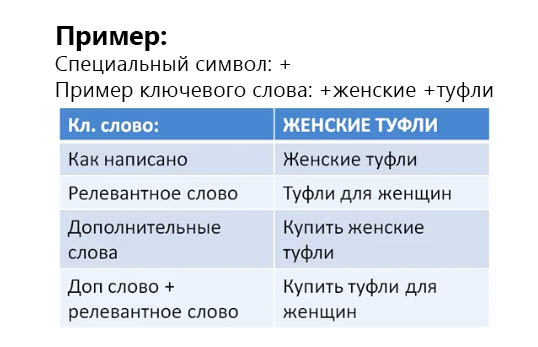 The main task of the modifier is to bring the keywords to more accurate word forms, which leads to a decrease in coverage, but increases the relevance of impressions. Applying this type of match potentially multiplies the number of conversions while maintaining tighter control over the campaign.

Renders impressions only when all constituent words of the keyword have been used in the query, and in the same order. This Google Ads match type is stricter than the previous ones. 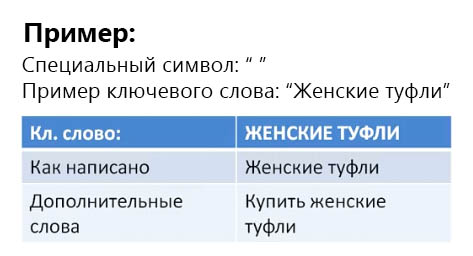 To display an ad, you need to enter exactly the specified phrase in the search engine without dilutions and declensions. It is possible to add additional words before or after the key.

If you use the exact keyword match type in AdWords, your sponsored posts will show up when you enter a phrase that exactly matches the keyword. It is considered the most strict of all.

Allows you to fix the number of words in the query, their order. However, ads will be shown when requested in the plural or if the phrase contains conjunctions or prepositions.

Exact match should be used with a small advertising budget, if there is no desire to select negative keywords or if you need to break a more general phrase into its component parts.

Negative keywords allow you to limit ad impressions for non-targeted keywords. They help you target your publications, reduce costs, and increase your ROI.

In this way, you can exclude clicks on those words that do not bring tangible conversions, and also not show ads to those users who are not interested in your product or service.

Important! Working with negative keywords is relevant for any target audience coverage and when using almost any type of match. The wider the coverage, the more carefully you need to select the minuses.

Since 2020, keyword match types in Google Ads such as broad and phrase match have started to work for similar queries. The updated rules make them almost indistinguishable, and key word forms become less significant.

Google has provided information that would make the benefits for advertisers very significant:

In addition to the positive aspects of the changes, there are also some disadvantages:

Artificial intelligence is becoming more and more sophisticated and now takes on many tasks that were previously done manually. In the future, advertisers should carefully monitor keyword reports and quickly respond to irrelevant queries by adding them to negative keywords to maintain their promotion.