Skip to content
adwservice.com.ua » 5 ways to diversify your remarketing lists

5 ways to diversify your remarketing lists

We all know how remarketinga-google-adwords works: a user visits the site, looked at something there, left the site, and when he then surfs the Internet to other sites, your banner follows him there.

When setting up remarketing through Google Analytics, there are 7 standard options for collecting audiences:

Basically, remarketing jobs have a lot of room to go and are effective and should be used and tried every single one of them. But it often happens that these lists are not enough and, in fact, provide much more opportunities to collect audiences. To diversify these standard audience gathering scenarios in Google Analytics and get the most out of your statistics, you just need to simply search. What to look for, you ask? General characteristics of those who are potentially interesting to you as buyers.

Here are a few examples of what kind of remarketing lists you can create in the Audience Editor by examining various audience behavior reports in Google Analytics, analyzing them, and building theories/hypotheses.

In this example, we will call the engaged audience those users who “walked” the site for a long time, visited many pages or made several sessions. For example, an audience that spends more than two minutes on the site, you can see that since the average number of pages per session per user is 2.98, there are more users who view more than 3 pages per session. By the number of sessions, here you can select those who performed more than one session. This is of course a few sessions, but even this allows you to target a more engaged audience.

The following example highlights the audience: session duration + number of sessions. For 3717.52 UAH spent, 747 conversions were achieved. That is, 4.97 UAH per conversion.

2. Your user is waiting 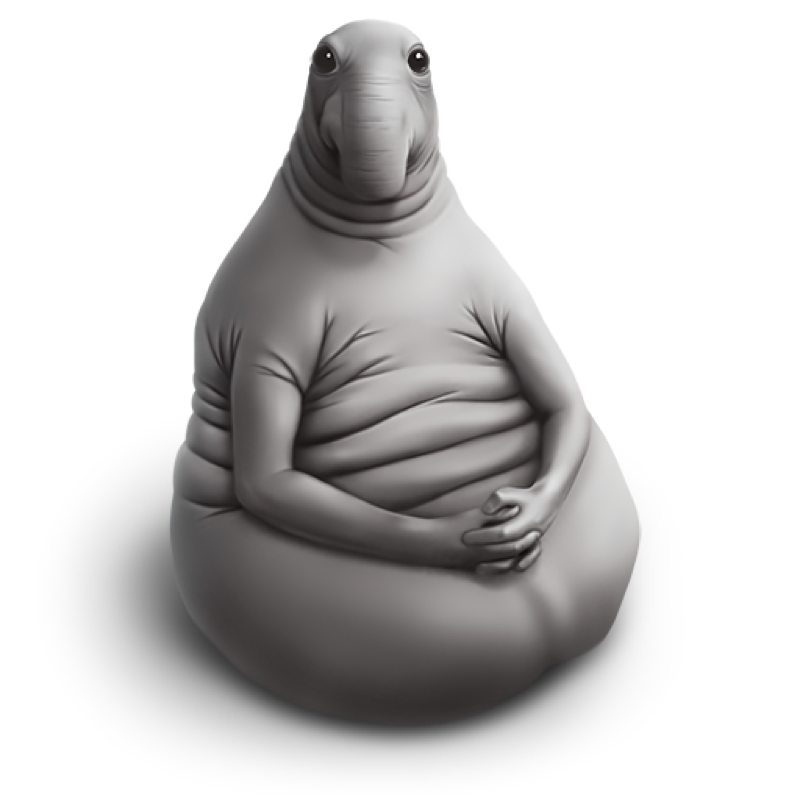 It can happen that users have many high-duration sessions but don’t convert. That is, they visit the site several times, look at something for a long time, and leave. These “waiters” when creating an audience in analytics are similar to an engaged audience, only in this case we also indicate that this audience did not convert.
Why do we call them “waiters”? Perhaps they are just waiting for promotions or mid-season discounts in order to purchase goods at better prices.
During the promotion period, you can try to launch remarketing for such an audience. In this example, we studied the behavior of users who visit a site selling fireplaces and fireplace inserts. Having studied the report on the audience, we saw that users spend an average of 3 minutes on the site, but noticed that they still get quite a lot.

Since the goal was to narrow the audience, a segment of users who were on the site for 3 minutes was superimposed on the report. They turned out to be quite the optimal number, so an audience was created for those who made more than 3 sessions lasting more than 3 minutes and did not convert, and a promotional remarketing campaign was created for this audience.

A little later, the same audience was created only for the product category we are interested in.

3. Why work when you can buy shoes? 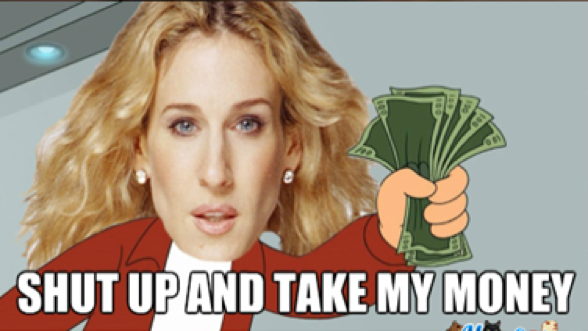 Case on the example of an online store of expensive branded shoes. The brand was well-known, there was a lot of traffic to the site (paid traffic was only in 3rd place in terms of traffic), but it did not convert into leads very well. We were faced with the task of identifying an audience that would bring leads. The task is not easy. The search converted poorly, branded queries could not be advertised – because they were the first in organic + there were no competitors in the advertising results. Dynamic remarketing and regular remarketing worked well, media is not bad, but already more expensive in terms of cost per conversion.

After studying the behavior of users on the site and the number of sessions by time of day, we built a hypothesis according to which the audience was divided into working (from 8 to 17:00) and non-working hours. Weekends were not advertised at all (many clicks – few sales). Therefore, we launched remarketing for this audience, which visited the site on weekdays from 8 to 17 with a schedule of impressions, in fact, from 8 to 17 on weekdays. And this is what came out of it

In a short period of operation of this campaign, 2 transactions were performed at $10.52. I hasten to remind you once again that shoes are expensive, so this turned out to be a very profitable strategy. Apparently, people are really more interested in shopping during working hours

Sometimes it takes users more than a day to make a decision. In such a situation, you need to not only constantly remind the user of yourself, but also show him different ads, because as the user sees your banner on the Internet, he starts to get used to it and starts to ignore it, so you won’t be able to keep it with ordinary remarketing for all users, the interest of the user who decides about 30 days, because by the end of this period of 30 days your banner will no longer be noticed (burn-in effect).
From the report on time to conversion, we can see how many days pass from the moment the user first visits the site until the conversion is made. In this example, we consider the time to conversion on the example of an online store of sporting goods, mainly fitness equipment
We see that users either make a conversion on the day of the session, or it is stretched over different intervals. We built a hypothesis and identified 3 audiences based on the report:
Those that make decisions up to 5 days, from 6 days to 11 and from 12 to 30. We created hotel lists and separate ads for each of these audiences, and this is what we got 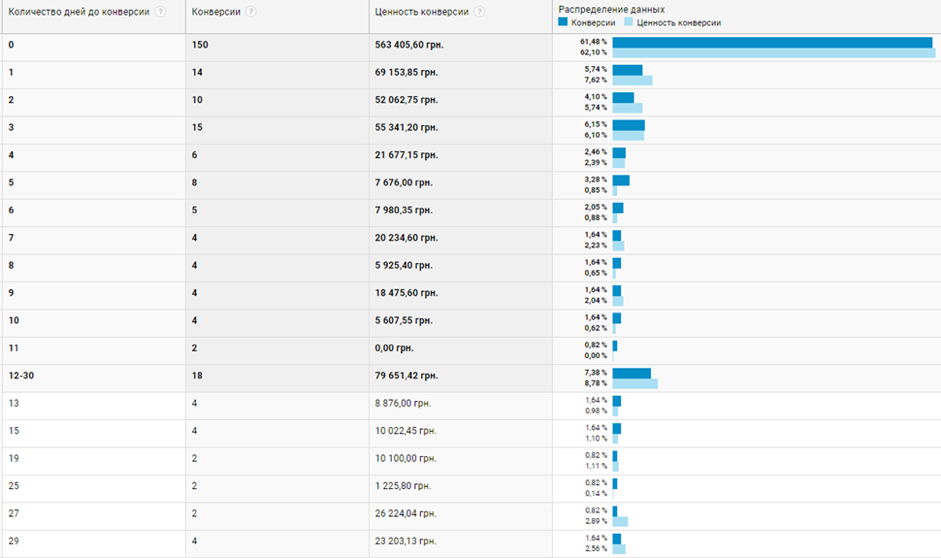 Audience with a decision period of 12 to 30 brought the most conversions, so think about it, maybe you are losing conversions, because the user thinks for a long time, and you could not finish it at the right time because that your banner is boring to him? Or has its intensity decreased?

The specificity of the product that needed to be sold in this example (we will simply call it expensive movable property) was that several categories of customers were interested in this product as a Lamborgini car: those who want to but cannot afford (those who actively study the subject, seem to understand all the details), those who go in for professional sports, but don’t have money for our product, and those who buy it for the soul and also go in for professional sports (buying this product is impulsive for them).
Our goal was to target the third category. And we did it in the following way: an international exhibition was held in Europe on topics related to the activities of our client. The goal was to gather an audience that was at the exhibition in order to set up remarketing for it and sell our product, because the exhibition is expensive, tickets too, flights too, the exhibition is specialized, so our target audience was at the exhibition. There were several categories of campaigns:

1) these are regular remarketing lists in which we collected an audience that visited our site on certain days. There was a specially trained person at the exhibition, whose goal was to get a person who approached our client’s booth to enter the site. Thus, the user attracted by the manager would get into this list and after the exhibition he would be pursued by our remarketing.

2) two campaigns in the display ads, since we understood the presence of a human factor in maneuvering to attract users to the site with the help of the aforementioned person, we assumed that the list might end up being smaller than needed to launch: the first campaign targeted a radius of 30 km around the exhibition site 24/7, the second with a radius of 1 km and only during the exhibition. Both campaigns were informational in nature, and both led to a page with the location of our client in the exhibition pavilion.

But, none of these strategies will work if you forget about the message in the promotional message!

The message you want to convey to the audience is very important, otherwise, no matter how cool your strategy is, it will not work without the right announcement. After all, the user does not know that you have done a huge analytical work to show him this ad at this particular time. He will only see the ad, and it will either hook him or not.

So keep your users hooked, don’t be afraid to be creative and test. So be brave!

Do you want to deepen your audience on the site?

Do you want to use every person that comes to your site, regardless of the traffic source?

Submit a request or call. Be one step ahead of your competitors!