Skip to content
adwservice.com.ua » How to build a semantic core for contextual advertising?

How to build a semantic core for contextual advertising?

To get good results from running online advertising, you need resources and time to optimize it. But one of the most important steps in setting up any campaign is compiling a semantic core for contextual advertising.

It is competent work in this direction that is the key to the high effectiveness of the campaign. Poorly chosen semantics will consume huge resources without adequate returns.

What is the semantic core for contextual advertising?

Semantic core for an advertising campaign is a list of phrases for which users interested in the product will be able to see the ad.

Important! It is at the stage of creating the core that the competition for the buyer begins. How well you feel the client, understand his needs and can predict the wording of his queries in the search, depends on the productivity of the campaign.

Three-quarters of success is laid at the level of semantics, which means that it is its quality that should be given especially close attention.

Why is it critical to collect high-quality semantics for an advertising campaign?

Selection of effective keywords. But how to assemble a semantic core for contextual advertising professionally, and what does it give the advertiser?

Professionally selected keywords allow you to receive certain benefits in the future:

There are two ways to collect the semantic core for contextual advertising.

The first involves eliminating special tools for generating a list of keys, and is based solely on guesses about how users might search for a particular product. This approach is dangerous. Based only on your own inference, you can miss a lot of high-performance keys or include phrases with zero frequency in the semantics.

The second method is to use tools that allow you to evaluate the real picture – the actual requests of the audience. They help to obtain information about competitors, scrupulously collect semantics and create an exhaustive list of queries. The relevance of advertising with this approach increases significantly.

Advice! You can increase the return of an advertising campaign and create a high-quality semantic core by combining both approaches.

How to create a semantic core for an advertising campaign?

In order to collect keywords, you need to perform several steps, the logical sequence of which is not recommended.

Markers or grouping words (also called bases or clusters) are words that serve as a source for parsing, during which the main set of phrases or phrases is selected. 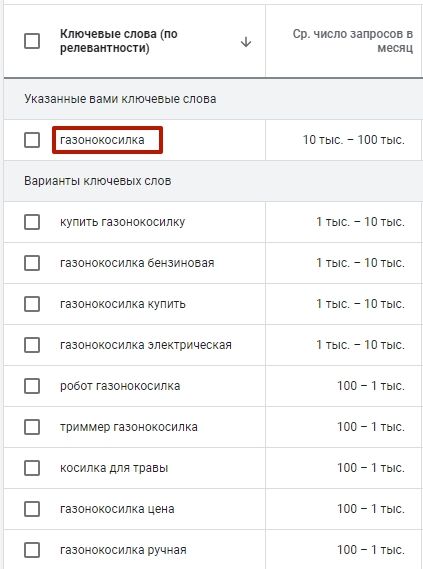 Important! For parsing, you should select all variants of phrases used to promote in contextual advertising for a particular campaign.

As an example for garden equipment, markers are “cultivators”, “trimmers”, “aerators”, etc.

In the Tools & Settings section of this service, there is a tool called Keyword Planner. You can use it for free. 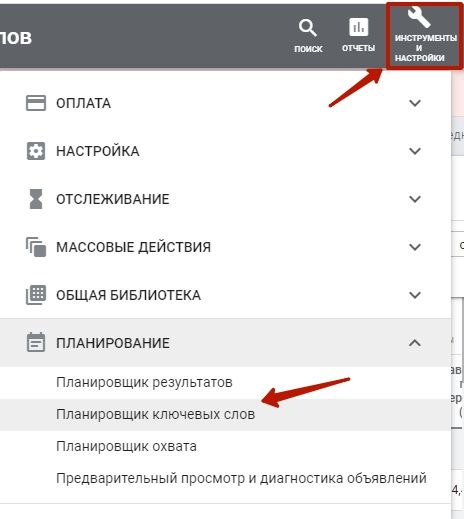 There are two ways to generate a list of keys:

Here you can also find data on the average monthly number of requests and the level of competition for them: 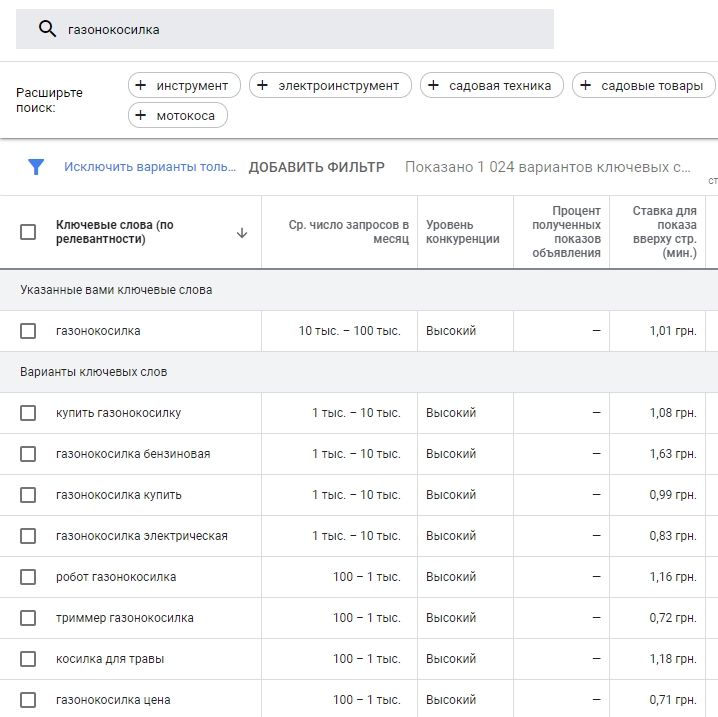 It takes time to collect keywords manually using the Google Ads Planner. Special automation services will help save resources. Such tools help to group not only key phrases in the table, but also add competition and frequency indicators to it.

Key Collector is one example of such software. The tool is paid and offers extensive functionality for those who are engaged in semantics at a professional level and deal with kernels containing more than half a thousand keys.

The software allows you to quickly parse and collect frequencies. You can quickly unload a ready-made data array from it for further work, although the tool itself is available only within one device.

To create a semantic core for contextual advertising, you can use the accumulated statistics on organic traffic by exporting queries to Excel for the longest possible period of time from Google Analytics. To do this, you will need to link your Analytics and Search Console accounts. Further, this function is available in the “Requests” subsection of the “Search Console” section in the “Traffic Sources” menu.

The method with unloading keys from organics is applicable only to sites with a history. If the resource is new, and such traffic does not yet exist, then you can use information about the requests of competing companies.

Several services help with this. The most convenient way for Google Ads is to use the Serpstat service. It contains the most complete database of keywords in Russian from both paid search results and Google organics.

Serpstat allows you to analyze competitors, contextual ads and their semantics. The service can work from different devices in multi-user mode, so it is suitable for those who plan to use it in a team.

Search hints are a non-obvious but very good source for adding semantics. They can be downloaded using special programs or directly from Google search results. 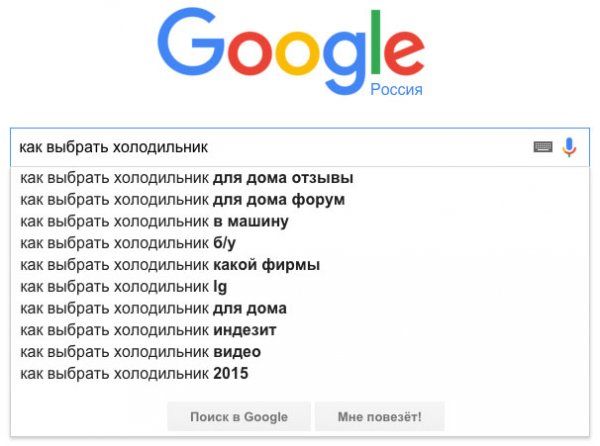 Both of the programs described above – Key Collector and Serpstat – have the corresponding functionality.

Peculiarities of compiling a semantic core for Google Display Network

The formation of the semantic core for the CCM has its own characteristics. It is important to remember the following rules:

What mistakes are made when collecting semantics for contextual advertising?

When working on semantics for contextual advertising, the following mistakes are most often encountered:

Using the knowledge and information gleaned from the article, you will be able to professionally approach the compilation of the semantic core, which will be the key to the success of your advertising campaign.