The alpha-beta campaign method makes it possible to create contextual advertising in Google Ads aimed at a “hot” audience, and at the same time save money by reducing costs for those users who are not going to purchase the promoted product in the near future product.

In the English-speaking audience, you can find another name for this contextual advertising optimization method – “Peel and Stick”.

What is the purpose of Google Ads alpha-beta campaigns?

The technique is based on a point selection of the most conversion keywords in already running advertising campaigns and creating new ads based on them using an exact match of all user requests.

As part of the alpha-beta campaign method in Google Ads, an advertiser usually creates two types of AC:

How does alpha-beta campaign optimization work?

Google Ads campaigns are optimized using the alpha-beta method according to the following algorithm:

At this stage, it is important to understand which values of certain indicators you will consider acceptable, and which ones will become unacceptable. The most popular criteria for evaluation are return on investment (ROI), return on advertising spend (ROAS) and cost per action (CPA).

For example, if 1000 users went to your site for a certain keyword combination, 40 of which made a conversion action, and this is cost-effective, then such a product promotion can be considered successful. Within the framework of the same AC, search phrases with a conversion of less than 1% will be classified as ineffective.

Its main purpose is to accumulate information for the subsequent identification of those keys that initiate transitions to the site and conversions. With the help of this AC, statistics are collected and monitored on user requests, the most effective of them are highlighted.

Advice! The advertising budget of a beta campaign should be limited, guided by common sense. You should refuse to show ads on the first four lines of search results. It is better to be placed lower, but cheaper.

The use of search phrases in broad accordance with the specification will also help save money.

By testing the semantic core using alpha-beta campaigns in AdWords, we solve the problem of selecting “good phrases”. Such requests have the highest conversion rates and provide the desired promotion result. 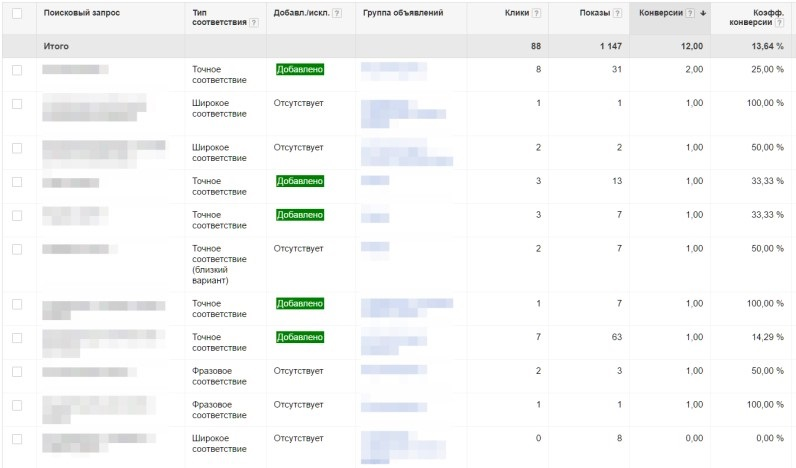 During the process of evaluating requests, the most successful requests will be moved to the alpha campaign on the “combat” budget. This will keep the groups and ads, but the bids will increase. Based on the collected analytical data, a request that performed well in beta will bring even more profit in alpha, being located on high lines of search results.

Important! As part of the alpha campaign, use phrases only in exact match, since your experience has shown their high efficiency and conversion in this form.

Be aware of a nasty feature of exact match: phrases like this trigger impressions for queries containing typos or numerals. A list of negative keywords will allow you to exclude them, where you should put everything that is not equivalent to an exact match.

We evaluate the performance of all key phrases in the beta campaign, taking the parameters determined at the first stage as a basis, bring them into exact correspondence and put them in the lists of negative phrases: 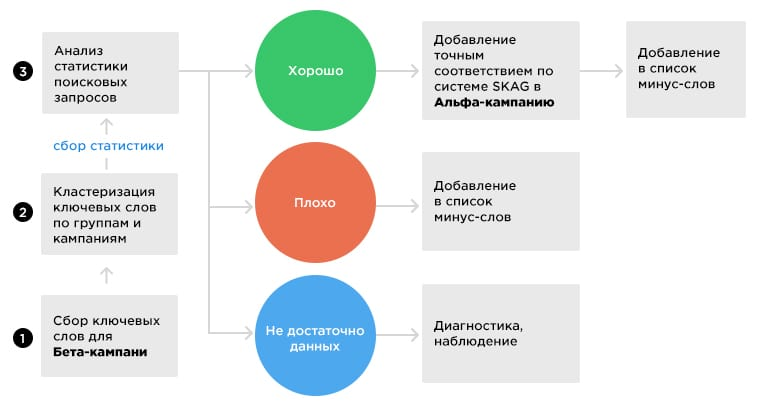 The low-performing phrase filter tool works at the A-campaign level to identify expired keywords. This factor must be constantly monitored. For example, you increased the bid per click of a request in alpha, after which it stopped showing a positive result.

If after lowering the bid to the previous level, the effectiveness of the phrase remains low, then it is advisable to exclude it from the combat campaign and the list of negative phrases. This broad match query should be moved to the beta campaign and reevaluated.

High frequency keys tend to get into alpha quickly. But for phrases that are not so popular, it takes quite a long time to collect enough statistical data to make a decision.

The effectiveness of such keys cannot be quickly assessed, so you need to be patient and observe. Indeed, over a long period of time, they will definitely show themselves.

The method of alpha-beta campaigns in Google Ads allows you to identify and regularly analyze exactly such search queries, which often gives the effect of a “long tail” in the advertiser’s office. Numerous such keywords can significantly affect the conversion rate and its cost for the better. 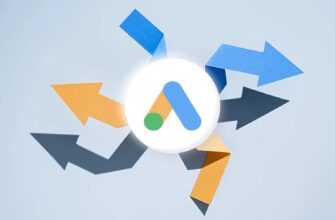 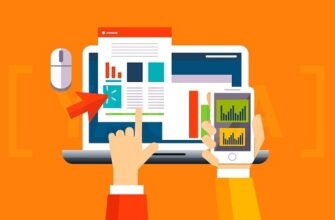 Where to get pictures for contextual advertising?
Neither the most creative headline nor the most catchy
0506

How to run an ad on YouTube: a setup guide
YouTube ranks second in the ranking of the most popular
0561

How to become a Google AdWords partner?
A partner of the Googles Partners program can become
083
Sergey Shevchenko Google Logist